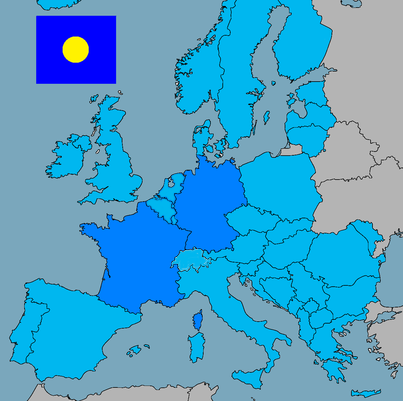 Dark blue: core European Federation; Light blue: rest of Federation
The  European culture, through its roman, germanic, christian and Enlightenment heritage, is more important than the local cultures of Europe.
​​
This is why we are European patriots.
​​
We thus want a European federal  Republic.

Such a european féderal government will be responsible for Defense, Foreign Affairs, Industry and Environment.

We want to create the European Republic in the main core European countries first (France and Germany) by coming to  power in those countries or by deciding the Heads of states in such countries to do so.

We then want to incorporate into this Republic the rest of the European countries.

FEDERAL EUROPE is a euroconservative culturalist and social political party. Its goal is to bring together conservative patriotic and liberal pro european voters in France and Germany by proposing a strong Europe and a European patriotism.​

The 3 basic tenets of our party are:
​
1/ European patriotism first, local patriotism second
Europeans share a common culture, a common territory, a common history and a common population. They form a Civilisation and thus a grand Nation based on the european national identity.
Their culture is mostly Roman, Germanic, Christian and rational with inputs from Catholicism, the Renaissance, the Reformation and the Enlightenment.
Their territory is delimited by the Atlantic, the Mediterranean and by the Russian territories.
Their history consists of the Roman Empire, the Frankish Empire, the Holy Roman Empire and the Papacy.
Their State existed for 1000 years from Caesar to the grand sons of Charlemagne.
Their population is in greater part Germanic, with Italic, Slavic, Celtic and other elements.
​Minorities living in Europe are part of the European Nation and contribute to its culture.
The grand European Nation regroups the small nations of Europe.
European patriotism must thus come before French, German, Dutch, British etc patriotism.

To achieve this goal the FEDERAL EUROPE Party has to seize power in these countries. The traditional parties cannot propose the creation of a European State because they are divided along national lines and  because they have no vision.

Only a well organised party with a European leadership, a correct ideology and a realistic plan can give voters the confidence that a European State will be established.

This will cause a tremendous political effect. If they refuse, support should be provided to the FEDERAL EUROPE party  to sideline the political forces fighting incorporation,

Once the party will have seized power in the 2 main core European countries, i.e. France and Germany, or once these 2 countries  will have agreed to create a European Nation State,  a European Constitution.will have to be adopted by the French and the Germans separately.

​Such a constitution should of federal and presidential character.

The Constitution must be federal because Europe is diverse.

Only maters where individual european nations cannot be sovereign should fall under the power of the European federal governement, namely Defense, Foreign Affairs, Industry-Research and the Environement.

Each european nation shall remain sovereign for all the other matters.

The Constitution should be presidential because this enhances territorial integrity and political stability.

The president will be the head of state, of the government and of the armed forces. He will name the ministers. The president will share legislative initiative with the Assembly. He will have the possibility of subjecting legislation to referendum, with the agreement of the chancellor of the European federation.

A chancellor of the European federation will be elected by the citizens at the same time as the president. He will counsel the president, implement politicies defined by the president by orientating, by controlling and by co-ordinating the action of the ministers. He will succeed the president in case of president vacancy.

​The referendum of popular initiative must be available and easily accessible for the citizens to establish an efficient and permanent democratic check. The legitimacy of the mandate of the political leaders must be excluded from the fields of this referendum

The European Federation must be a federal State to take into consideration the important differences within Europe.

​The official languages of the federation should be English (because it is the most widely known European language in Europe),German and French. These languages must be used in the federal government, in the federal administration and army  and for federal exams. In every other instance the language of the local country must be used.

The other European languages should be used within  the member countries for all the  other matters.

A power to tax in order to pay for federal european expenditures will be granted to the European Federal State.

Eventually, Foreign affairs, defense, borders, justice related to crimes against the European Republic and State, trade policy, industry, research, part of equipement, part of environement, part of agriculture , part of higher education, part of economy as well as part of History teaching should be transferred to the european federal governement. Member countries will retain the other powers and responsabilities.

European concentration of energy, telecommunications, airlines, railroad and weapons industry . Investment in digital infrastrucutre and in strategic or underdeveloped sectors in partnership with private companies will be done.

​A European TV and Radio broadcasting company will emit in English, French and German with local subtitles.

The social market economy must be defended and enhanced. High income households and corporations must be taxed at a rate of 50% to help labour and middle classes, notably in order to sustain demand.

Investment in the poorest European countries must be  carried out to lift their economic and social level over the long term.

​Rationalization of public spending must be a constant goal of Federal, country and regional governments, in order to invest usefully, especially during recessions. Global demand must be supported.

Erasmus for every student who wishes to study in another European State. Possibility to vote and to become civil servant for every european citizen in any european country.

Visa free entry for study and work of US and Canadian citizens in Europe, on condition of reciprocity.

Protection of workers rights and negociation capability  by preventing discretionary lay offs, but alowing lay offs when both the employer and the worker agree. Longer unemployement benefits must be coupled to professional training, which must be improved through incitives and sanctions.

Protection of Pensions, but age for pension benefit must be increased.

Rationalization of public spending must be a constant goal of Federal, country and regional governments, in order to invest usefully, especially during recessions.

Every one must have the ability to access to health care at no or very little cost, through a public health network (hospitals, medical centers, associated health care professionals).

Higher income must be taxed properly (50%).

Improvement of Natality through social incentives and school infrastructures.
​Objective of man-woman  wage equality for equal job, via sanctions and incentives.

Protection of minority rights  Same sex marriage must be allowed but not adoption by same sex couples.

Increase of missiles forces, naval forces (especially submarines), air forces, space forces, their support network and the intelligence services. It will enhance the quality of its ground forces equipment.

​Defence budget: 3 % GDP of the European federation, notably to be able to defend the East of Europe and to promote European diplomatic and commercial interests across the world.

The European federation will set up mutual defensive alliances and/or military partnerships with other countries.

It will do it first with countries part of Central Asia (Turkey, Iran, Pakistan, Afghanistan, Azerbaidjan, Turkestan countries)  and with countries part of the Arab world. Central Asia and the Arab world are the two main European neighbours. From this position, the European Federation will be in the position to establish normal relations with Russia and to expand its influence in the rest of the world, especially in Africa.

Free orientation for Ukraine and Belorussia must be supported by Europe (but not their incorporation into the European federal state).

The European federal State will be a member of Nato at the beginning. But as it grows it will not need this membership anymore  because it will no longer need American protection.

However human relations between Europe and the USA will be enhanced (visas, studies, immigration).

The European federation will establish preferred trade and economic  agreements with its allies and it will support its military, industrial and agricultural commercial interests and those of its allies with its diplomatic might.

Establishment of European cultural institutes (which could be called Aristotle Institutes) in the main cities of the world and Europe to promote European culture, to support the teaching of German, French, English. and to promote cultural exchange.

​Help for regional diplomatic, military and political integration in exchange for diplomatic and military support on the part of the regional major powers.

Spread of a solid form of presidential regime because this form of regime is capable of ensuring  territorial integrity and social justice through sufficient power centralization while beeing checked by the people.

Fight against carbon emissions and protection of the environment, with setting of priorities, notably within the framework of the Paris accords.

Contribution  to peace  within the UN framework.